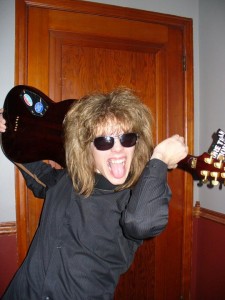 Oh! Hey… I didn’t see you there.  Um, no I wasn’t listening to Cinderella playing live with Van Halen…  Why would you say such a thing?!?       -shifty eyes-

Trevor began his radio career at SCSU immediately after graduating from high school, because who waits for their dreams? No, you chase those things down.  Since his arrival to campus he has held Training, Production and Programming positions at KVSC 88.1FM.

He has also produced and voiced for Oshkosh Wisconsin’s EAA Radio 96.5FM/1210AM whose online listenership alone is around 250,000 during Airventure.  Most recently taking on the bulk of production for 97.5 Radio X as well as rockin’ the Program Director role.  Will work for warm food, or dental benefits…